The 8 Stages of a Poker Tournament 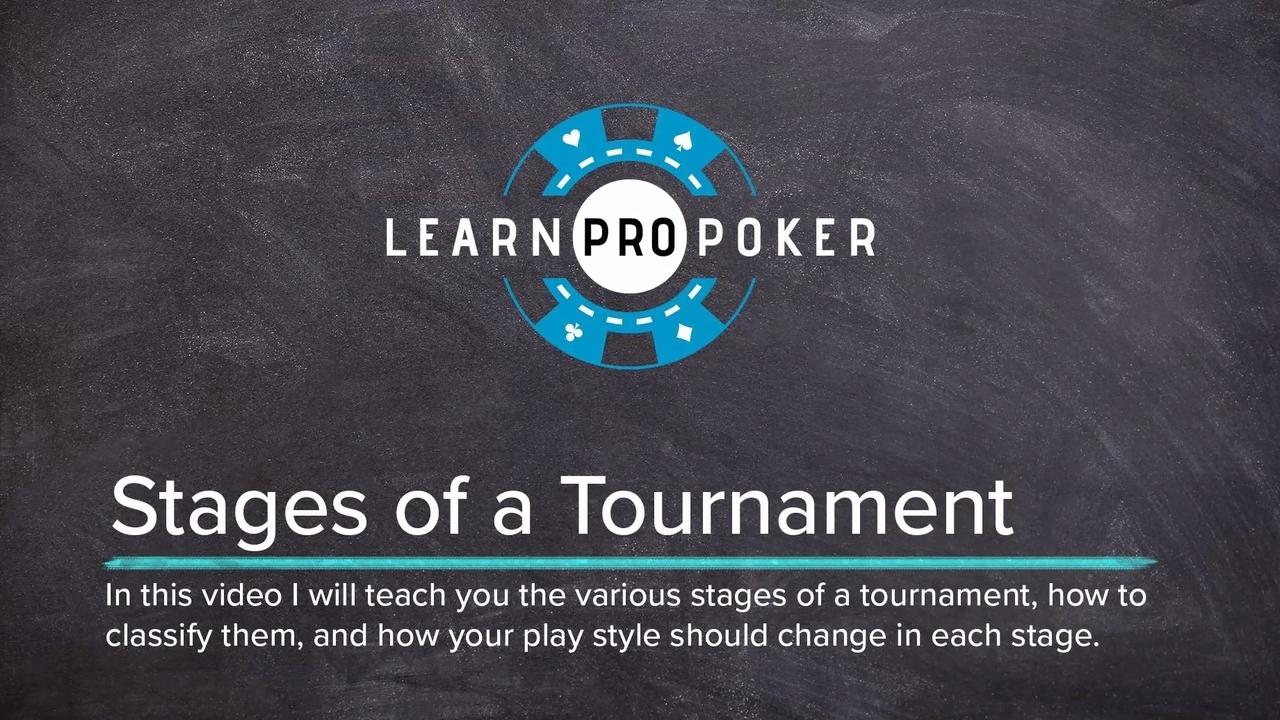 In this article, I am going to discuss the general main stages of a tournament, how to quantify them, and how various types of stacks during each stage should be played. I will also turn this piece into a video, so if you are a LearnProPoker member, please make sure to watch that while reading this article by clicking here.

Non-members: we will be having a big end-of-year sale starting within the next week. It should be our last sale for a while, so don’t miss your chance to join LPP at a discount!

There are effectively 8 stages of a tournament:

In the early stages of the tournament we have 85%+ of the field remaining. Because play is different whether we are in a re-entry tournament or whether registration is closed, I am splitting these into 2 categories although they play very similarly.

During the Early Stages we often have a deeper average stack depth (50bb+). From a theory perspective this means our opening ranges should be the most carefully built, but in actuality due to how much softer the early stages are and how good of implied odds we have, we should actually have more flexibility on our opens in order to play more flops with our weaker and deeper stacked opponents.

Once registration closes, or in a freeze-out tournament, our opponents start to treat their tournament lives with more value and tend to play a bit more cautiously. Overall, however, it’s still mostly similar to their play when entry was still open.

There are some freeze-out tournaments in which play can be wildly different compared to that of a re-entry. Those tend to be “larger” buy-in main events, weekend majors, or live series. In these fields our opponents tend to treat the early stages almost as cautiously as though we were nearing the money. This happens due to how many people will be shot taking in the field or won their entry via satellite, and therefore care a lot more about busting than if it were a typical daily freeze-out event.

It is important to note that these above generalizations apply mostly to our weaker opponents. Extremely good regulars will play much more balanced ranges for the most part, although still may make some minor adjustments that are similar.

The reason why this is a sliding scale that is relative to field size and % of players paid is due to how large field tournaments and small field tournaments play drastically differently. Also the percentage of the field that gets paid out, for example whether it is 15% of the field paid or 8%, will also impact when we are entering the Near Bubble stage as well.

From a practicality standpoint, whether you view the “Near Bubble” as 2% of the starting field from the money, or 10% doesn't matter too much. The reason this stage of the tournament is noted, is because this stage plays wildly different than early stages, and also plays differently than the actual bubble.

How to tell you are in the near bubble is generally a function of this question we can ask ourselves: As an average stack would it be easy for me to fold my way to the money?

Any time the answer is “yes”, there is going to be a lot of ICM pressure on medium stacks. The reason this pressure exists is because a lot of your equity from playing any given tournament resides in your ability to min cash. Playing for a deep run or a win can be more entertaining, but if your goal is to make the best decisions you can and make the most money then you need to start caring a lot about mincashing.

Strategically for us this means that when we have a near average stack and can fold our way to the money, we need to play very cautiously. We should have tighter opening ranges, tighter 3-bet ranges, defend our blinds much tighter, and continue post flop much tighter as well.

The money bubble can be described a couple different ways. More precisely as: 10% of the number of entrants paid from the money (i.e. 100 players paid, so when 110 players remain). Another way to think of this is being 5 or less orbits from being able to cash.

The Money Bubble can be one of the most profitable stages of the tournament for you, or sometimes the most frustrating. Being a big stack and able to consistently apply pressure is a lot of fun and can really help build our profitability, but being a medium or shorter stack is extremely limiting and forces us to play incredibly cautiously as well as take our time on decisions to limit our losses.

The Money Bubble is one of the stages of the tournament with some of the most ICM pressure. It can be very easy to make extremely costly decisions in this stage and not even realize it.

It folds to the small blind who has 80 big blinds, and they go all in. We are in the big blind. What is the worst pair we can call with?

The answer is Pocket Jacks!

An extremely simplified version of the math to figure this out is:

What is our current stack's value? = about $450 as most of our equity resides in the mincash since we are not likely at all to gain any pay jumps or run deep.

What is the value of our stack if we double? About $500-600. Most of our equity comes from mincashing due to increased payouts being minimal and large payouts not occurring for an incredibly long time.

What is their shove range? Any 2 cards due to how tight we have to call.

What can we call? Using a poker equity calculator we can see JJ has 77% equity vs their range.

So let’s look at similar situation for 1/10th of the field size:

It folds to the small blind who has 80 big blinds, and they go all in. What is the worst pair we can call with?

The answer is Pocket 7's!

These are somewhat rough estimations by me on exact stack values, there are ways to solve this exactly, but would require using a large field ICM calculator that can show exact values for each stack in the entire field. This exercise is to show how much bubble ICM can matter, how to estimate the edges you need, and how field size can drastically alter ranges.

Some of the sweetest words to any tournament player's ears. The play difference between the bubble and early stages of In The Money is the most drastic change between any other stages of a tournament.

This stage of the tournament plays very similar to the early stages once registration closes. While there is still a lot of value in your tournament life, and busting is certainly more unfortunate now than in early stages, players generally feel as though they have much less to risk and are doing their best to now build their stacks for a deep run. Because of this strategically I'd approach this about the same. The main difference being that our stack has a lot more equity now compared to then, and thus we should treat it a little more cautiously.

Late Stage In The Money

Because of these drastic differences between how people may approach this stage, it is incredibly important to pay attention to tell apart players who are trying for pay jumps and really don't want to bust, and those who are applying pressure on others and attempting to play harder for the win.

In especially large fields we can apply a lot of pressure on medium and shorter stacks that care a lot about pay jumps, in smaller fields we get to apply some pressure, but nowhere near as much.

Strategically our main approach as a medium or larger stack should be focusing on who we can apply the most pressure on, while as a shorter stack we need to find the balance between going for pay jumps and applying pressure on other shorter and medium stacks that allow us to.
Our goal is not to win but to instead make the most money we can based on the decisions given. Sometimes we focus on laddering, sometimes we get to hammer our opponents!

There are many different kinds of final tables and different approaches to each of them, as well as unique ways we need to play strategically based on how many players are left, the type, and what our stack is relative to our opponents.

That’s why I will be dedicating my next article entirely to the Final Table. I hope you have enjoyed this and have learned a bit from it as well.

Thank you for reading and best of luck at the tables!