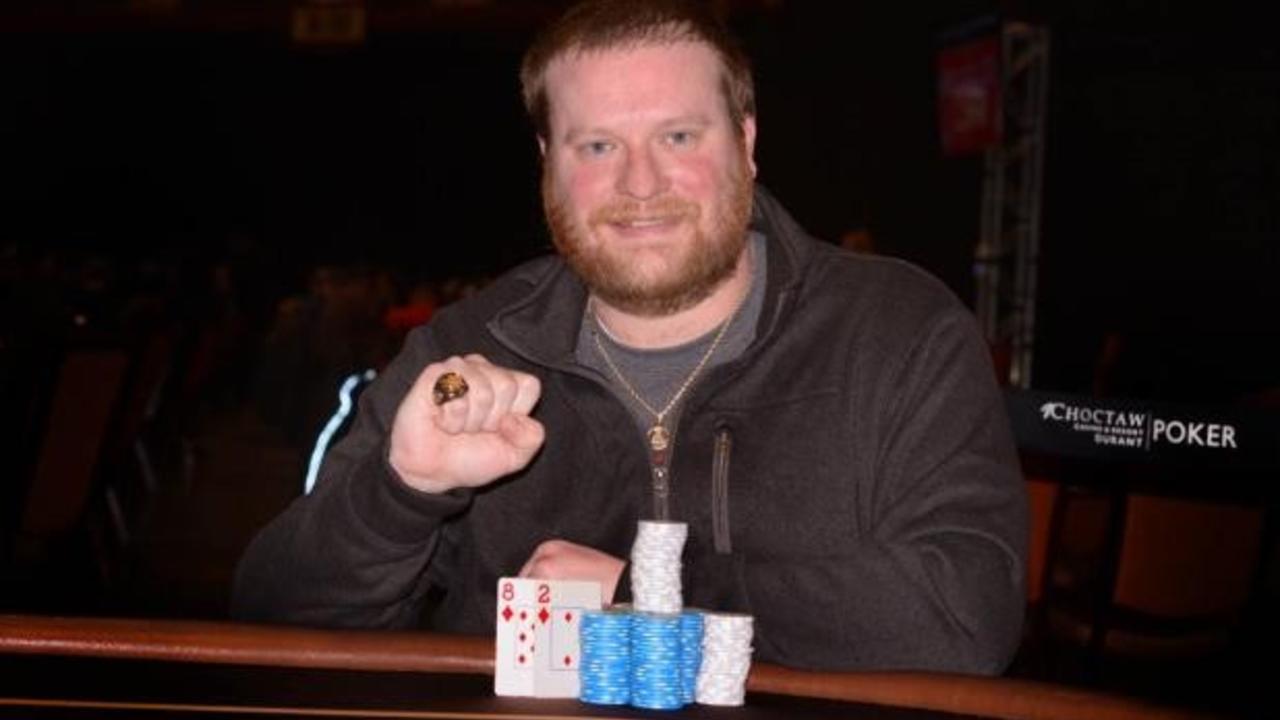 On January 14th, Steven McCartney was named the Choctaw Durant Casino Champion as he reached 4 final tables and earned his first WSOP Circuit Ring during the recent series stop in Oklahoma.

We caught up with him recently to chat with him about his amazing run and how LearnProPoker has helped him grow as a poker player.

Congratulations on the excellent run! So, for those who don't know you, tell us a little bit about yourself.

My name is Steven Mccartney and I live in Calera, OK. Those who have no clue where that is, it's right across from Choctaw. I have 4 kids: 3 step kids and a 12-year-old daughter. I enjoy traveling, fishing, Alabama football, and spending time with family! I am mainly a cash game player at Winstar playing 2/5 and 5/10 mainly.

My first memories were hanging around the poker table with family. All gatherings involved cooking, watching football, and ending the evening playing poker for change. I always loved it and knew deep down it would have a huge roll in my later years. When I was 14 I won the 1+ on paradise poker for 17k on my mom's account. She bought me a Chevy Beretta and kept the rest. I was a chef by trade and playing cards in my off time. I was making more money at poker so decided to make the commitment around 22. From 22-28 I played tourneys thinking I was great, even moving to Mexico for almost 2 years. I had success but it wasn't anything special, and variance started catching up with me. I talked with a few friends and transitioned to cash. I've found steady results and have been crushing it since. I never lost my love for tourneys though, and I played randomly online and when circuit stops would come to Choctaw. I also play a handful during summer WSOP. I was actually coached by Ryan years ago when we were all in the same team, but I knew when he came out with Learnpropoker that I had to become a member. I was probably one of the first members and really started studying it and taking it all in. This last series at Choctaw really opened my eyes to where I've become vs where I was.

Was this your biggest score? What was the moment when you won the final hand like and how did you celebrate?

I won my first ring, had 4 final tables and won the casino championship at the last stop. I also chopped 4 handed in the 600 taking home the biggest piece, but lost K5cc on K752, two club board, against two red 10s for my 2nd ring as I would have had 95% of the chips in play. After WSOP left,  Choctaw was continuing to run a few tourneys. I went to play cash, but it was no good. I saw a 70+ 3 flight tourney going on and jumped in. I ended up taking 4th out of 815 runners. I'm super excited for this summer as I'm steadily studying and learning more every day.

When did you hear about LearnProPoker and what part of it have you enjoyed the most?

Ryan and I are friends, and I remember hearing him say he had some big news coming soon. I had no clue he was about to launch one of the best training sites I've been involved with. I've been a member of many training sites, and this one just grabbed me. The simplicity but depth of knowledge presented in short videos is my favorite part of the site. I like everything about the site, there isn't a video that doesn't have value!

What has been the most important part of LearnProPoker to the evolution and improvement of your game?

I feel like the most important part, and the reason it does so well is the thought that went into it before launching. It's easy to watch, packed full of knowledge, and leaves you wanting to know more. The biggest impact for me has been opening my ranges both big and short stack. Knowing what I'm doing is correct has really solidified my confidence and taken me to the next level. Being able to go in and check charts and ranges from different stack depths has really helped. I've made lots of runs in big tourneys over the years, but if I had the knowledge I do now I definitely think the results would have been much better.

Thanks for this great site Ryan and keep up the good work!  And thanks for reaching out and giving me this opportunity to tell my story!

Upon hearing about Steven's amazing run, LearnProPoker head coach Ryan LaPlante remarked, "I see many cash grinders play tournaments too similar to their cash games. Seeing Steven, a long-time grinder, adjust his game to fit tournaments and have such a wonderful series isn't surprising at all to me, though.

I'm very proud that LearnProPoker has had such a quick and meaningful impact on his game, and helped in his journey to winning his 1st WSOP Circuit ring and player of the series!

I'm sure we'll see many more fabulous results from Steven in the future!"